Home > Blog > Argentina 2022: Its challenges for next year 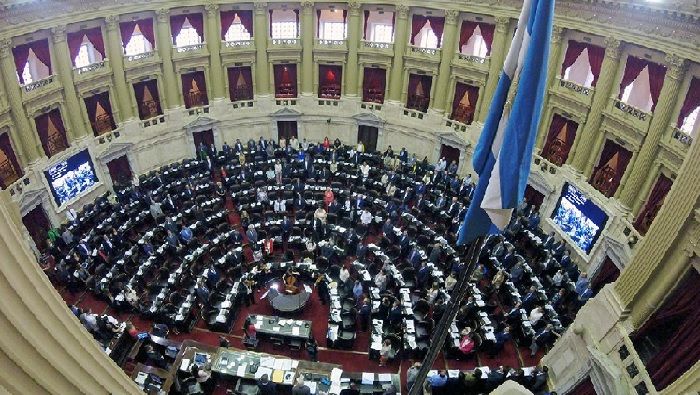 In November, the Frente de Todos coalition was defeated by the opposition Juntos por el Cambio in Argentina’s midterm, rocking the boat for the ruling party, thus their internal tensions. Despite this -not new- news, the current administration faces a very-much-complicated 2022, where the fragile economic indicators turn against them: the inflation reached almost 50% in 2021, the dollar puts more pressure on the Argentine peso and the Central Bank loses reserves every day. With this context in mind, what are the challenges for Argentina in 2022?

On September 4th, the legislative primaries took place in Argentina. Although these primaries were for each province to elect its representatives, if we add each specific result, the ruling Frente de Todos (FdT) coalition lost by ten points to the opposition Juntos por el Cambio (JxC), which achieved 41.5%. This result rocked the boat of the political stability of the coalition.

The election outcome took everyone by surprise since, until the last days before the primary, the polls predicted a very even election, and even some consulting firms forecasted the FdT as the winner. Also, it didn’t happen what JxC feared: in May, with the approval of the opposition, the government postponed the elections due to COVID-19 but many alleged that it was a strategy to try to win votes as time passed – which didn’t happen.

With these results, even though these were primaries (therefore it does not designate seats in Congress), the results gave the majority to the opposition in the Chamber of Deputies, and the ruling party would lose quorum of the Senate for the first time in 40 years. Inevitably, these two possibilities were the JxC objectives for the general election.

President Alberto Fernández accepted the harsh defeat, by stating that “obviously, we have not done something right.” He is in trouble as with the defeat, the party falls into a major political crisis. The radical wing of the coalition -aligned with Vice President Cristina Fernández de Kirchner- imputed the loss to Mr. Fernández, and several ministers put their resignation at the disposal of the president.

Even worse, Miss Fernández presented herself as separated from the administration, by indirectly imputing the defeat to the president. She blamed it on scarce social expenditure and demanded changes to the cabinet. Mr. Fernández gave in to these claims and carried the political cost of it.

The president would begin a 63-day race until the general election trying to turn it around and regain confidence among its party. To do this, he took populist measures: more social spending, freezing tariffs, increasing the minimum wage, and even fixing 1432 prices. In short, he gave away money to try to win the election.

In this scenario, on November 14 the general election took place, where the expected celebration of the opposition was overshadowed as they didn’t accomplish their double objective: although they had an eclectic triumph at the national level (42.5% JxC v. 33.9% FdT), the reaction of the ruling party was different from the primaries: it cut in provinces, and although they lose quorum in the Senate, it maintained its majority in the Chamber of Deputies. Then, there were no long faces, and even – surprisingly – said that that they have won.

The president released a message recorded on national television inviting the entire opposition to agree on a plan to pay the debt of the International Monetary Fund (IMF). However, days later, he declared against former President Macri, burning the bridge for future conversation with the opposition. In parallel, Mr. Fernández announced that he will pursue a second term as president, although there are still two years to go.

Last but not least, after losing the general election the vice president went into a 15-day-silence and had no public appearances until November 28 when she released another letter, stating that a deal with the IMF will define “the future development” of Argentina and the approval will be the responsibility of the Congress, not hers. Also, she said that it is only the president the one calling the shots and it’s its responsibility to come up with the IMF deal in the first place. So again, it seems to separate herself from the administration, and especially the IMF agreement.

Mr. Fernández’s administration needs to find political consensus (first, between its own party and then, among the opposition) to address urgent policies required by a country with fragile economic indicators. His odds are turning against him, and his strategy has been erratic.

Having this context in mind, what are the challenges to be considered in 2022?

Budget crisis: On September 15, the Minister of Economy presented the project, assumes agreement with the IMF foresees for 2022 a growth of 4%, an official dollar to $131 (today it is at $106 – Argentina has several types of exchange, the official government-controlled rate), inflation of 33%, and a deficit of 3.3% of GDP. The Budget had to be approved by Congress: so the Minister defended its project before Congress, but on December 17, the Lower House unexpectedly rejected the budget, a significant setback for the debt negotiation. Right after the bill was denied, Mr. Fernández received a call from IMF Managing Director Georgieva, to review the state of negotiations.

Even though a new budget could have been sent to Congress, the Minister of Economy announced that was not an option. Accordingly, on December 24 the president extended by decree the current budget 2021, as he did in 2020, only being legally able to reassign budget items.

Control Inflation: Argentina, excluded from the international debt market, has printed 850 billion pesos (8,5 billion dollars) so far this year to finance its deficit, putting pressure on the monetary market. Furthermore, there exist high inflation pressures due to the lack of confidence in the actual exchange market regime and in the future recompositions of relative prices. The result? one of the highest inflations in the world. Year-to-date goes 45.4% and Year-to-year 51.2%.

Central Bank Reserves: The Central Bank is fatally wounded with its reserves – during the past year they came to be with a negative balance. With Federal government debt maturities looming could be in the negative again. Until the November 14 elections, the government spent reserves to maintain a stable exchange rate.

In a Presidential Decree of September 19, the government established that the $4.3 billion in Special Drawing Rights (SDRs) granted by the IMF can be used by the Central Bank to expand the issuance of pesos and finance Treasury expenditures. Also, there was a payment of $1.9 billion in October to the IMF, made thanks to the SDRs.

Recently, the Central Bank released measures to ‘curb outflows of dollars’: it banned credit card operators from financing payments through installment plans if these are intended for tourism abroad and it will no longer allow banks to hold net cash dollar positions at the end of a trading day.

On December 23, the Central Bank made a new payment of $1.9 billion to the IMF but has further sunk the reserves, leaving Argentina in a much weaker position.

IMF Agreement: Argentina, which needs an IMF agreement seems not to want it. Before the November 2021 elections, Mr. Fernández declared that Argentina has not reached an agreement with the IMF because is not going to “kneel in front of the organization”. Surprisingly, a couple of days after the primaries, he went to the G20 to seek international support for the deal and join Georgieva. Then AF argued that in 2022 Argentina “cannot pay the IMF.”

On November 20, The Minister of Economy said that the government wanted to reach “understandings” with the IMF before seeking Congress approval. Hence, on December 5, he traveled to Washington D.C, where afterward their meeting with the IMF staff, the organization released a week later a statement, saying that there were general understandings about improving public finances, tackling persistent high inflation, supported by policies to build international reserves, develop the domestic capital market, strengthen the effectiveness of public spending, and improve monetary policy operations.

Afterward, on December 13, the Minister stated that “there is no way that anyone could consider that Argentina could have the capacity to pay those maturities in the period in which they were agreed”.

Later, on December 22 the IMF suddenly published a 135 pages report of the $57 billion loan to Argentina – the biggest in the history of the organization. In there, deputy director Per Bekk acknowledged that “the program did not succeed in improving confidence and delivering on its objectives” and that one of the main problems with Argentina was “a lack of [investor] confidence in fiscal and external sustainability”.

With Argentina excluded from international debt markets, reaching an agreement with the IMF will be imperative to avoid $19 billion in maturities next year. The 2022 budget assumes an IMF agreement, but the need to recover political volume will likely lead to larger public spending, nonetheless that by doing that, it puts uphill the agreement with the IMF, if not impossible.

An IMF agreement cannot be reached without main changes in macroeconomic policy. Sooner rather than later, Mr. Fernández will have to define how to lower the fiscal deficit and inflation and reorder the economy. An unpopular measure considering Argentina’s historical expenditure priors.

The president will have a tug-of-war in and out of his party. His party’s internal contradiction makes it difficult to take coherent measures without being attacked.

He must bet on a stern plan in December so that it has the option of being considered by the opposition and try to get the Argentine economy afloat.

The government has two options: either it aims to finally close an agreement with the IMF getting Argentina’s account in order, or use its two-way strategy used so far: they talk privately with the IMF promising reforms, and at the same time they criticize the organization in political rallies, stating that their demands are impossible and conducts more state intervention.

Whatever decision Mr. Fernández must do it soon. Time is of the essence, and he does not have the political power to continue playing both sides with the IMF, especially when is your creditor for forty-five billion dollars.