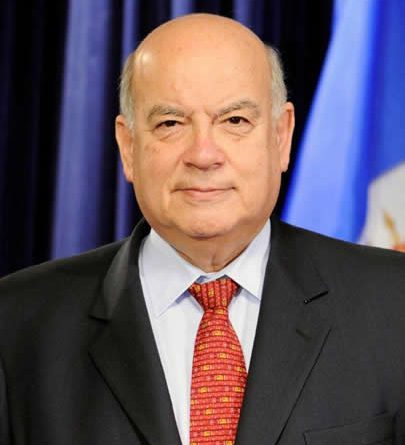 José Miguel Insulza was elected as Secretary General of the Organization of American States in 2005 and reelected in 2010. The Chilean politician has an accomplished record of public service in his country. A lawyer by profession, he has a Law Degree from the University of Chile, did Postgraduate Studies at the Latin American Social Sciences Faculty (FLACSO), and has a Master’s in Political Science from the University of Michigan. In the early 1970s, Insulza played an active role in Salvador Allende’s Popular Unity government, and following the coup that brought General Augusto Pinochet into power, he went into exile for fifteen years, first in Rome and then in Mexico. In Mexico City, he was a researcher and then director of the United States Studies Institute in the Center for Economic Research and Teaching. He also taught at Mexico’s National Autonomous University, the Ibero-American University, and the Diplomatic Studies Institute. Insulza was able to return to Chile in early 1988 and joined the Coalition of Parties for Democracy, which won the plebiscite against the Pinochet regime in October of that year. Under the Presidency of Patricio Aylwin, Insulza served as Chilean Ambassador for International Cooperation, Director of Multilateral Economic Affairs at the Ministry of Foreign Affairs, and Vice President of the International Cooperation Agency. In March 1994, under the administration of President Eduardo Frei, Insulza became Under-Secretary of Foreign Affairs and in September of that year was appointed Minister of Foreign Affairs. In 1999, he became Secretary General of the Presidency, and the following year he became President Ricardo Lagos’s Minister of the Interior and Vice President of the Republic. When he left that post in May 2005, he had served as a Government Minister for more than a decade, the longest continuous tenure for a minister in Chilean history.

All the heads of state or government who participated in the last three Summits of the Americas were democratically elected. This situation was unprecedented in the hemisphere; the past twenty-five years have become the most prolonged period of democracy in the Western hemisphere since independence.

Democracy begins with free and fair elections. However, there are other essential elements necessary to be truly democratic. Electoral beginnings are indispensable, but not sufficient, as stated in the Organization of American States’ Inter-American Democratic Charter (IADC), which was signed by the countries of the Americas on 11 September 2001 in Lima, Peru. The charter proclaims democracy as a right of the peoples of the Americas and a commitment for every government of the region.

The charter includes a much wider range of conditions for a government to be considered democratic. Of course, it includes “periodic, free, and fair elections based on secret balloting and universal suffrage,” but also adds, inter alia, respect for human rights, exercise of power in accordance with the rule of law, the pluralistic system of political parties, the separation of powers and independence of the branches of government, freedom of expression and of the press, and transparency of government activities.

No democracy in the world fully meets all the conditions set forth by the charter. The IADC is a program for democracy, an ideal that all the countries of the Americas embraced freely when it was approved in 2001. But when we evaluate the recent development of our democracies, we can use this as a standard to compare how much the democracies in the countries that approved the charter have progressed or eroded since then.

The late Charles Tilly, author of Democracy (published in 2007 by the Cambridge University Press), referred to three large-scale processes that give form to democracy or, to the contrary, can represent historical setbacks destructive of democracy when they are prolonged or reappear. These are the suppression of power centers outside the government, the elimination of inequalities between categories, that is, rigid divisions between social sectors, and the generation of “trust networks” within society.

“Democracy begins with free and fair elections. However, there are other essential elements necessary to be truly democratic.”

There is no doubt that our societies have made important progress in these three processes, with natural limitations if we consider the time period involved. Real power centers outside the government continue to exert outsized influence, especially in the economic arena, but are greatly reduced in the military and religious spheres. Even though the practices of race and gender discrimination persist, continuing to trap people in poverty and inequality, there has been considerable headway in almost completely eliminating such practices from our laws.

Nonetheless, the risks of deconstruction (destruction) are present. Today’s powerful criminal groups are a seed of independent power. They control their own territories and dictate their own laws, which they impose on others outside the authority of the state. The privileges that a small minority of people enjoy and the existence of social systems (health, education, and security) that are differentiated in terms of access and quality lead to the creation of distinct categories of citizens.

Governability has also increased substantially in recent years. While in the fifteen years from 1990 to 2005 eighteen governments of the region ended before their terms were completed, in recent years only two, in Honduras and Paraguay, have ended prematurely.

Nevertheless, institutions are fragile and consensus building is still not a priority. In the context of a legitimate political struggle, the democratic fallacy that the majority has the right to change the system as it sees fit has been gaining force. Consequently, the majority tends to accumulate power and disregard the participation and rights of minorities. The justification for this temptation is always the need to “complete a task” or to deal with “urgent crises” in society. But if institutions and laws are changed for this reason, institutions are weakened, as is ultimately the democracy those institutions claim to defend.

The temptation to reform laws governing the length of terms of office and reelection arises every time they see a possible political advantage in it, while they frequently amend laws regulating fundamental aspects of democracy, including the exercise of public freedoms.

Latin America is in a constant process of revising its political institutions, and in some cases this does not occur as a result of a legitimate desire to create a broader consensus and greater stability, but rather as a way to gain electoral advantages to preserve or enhance an administration’s power.

Especially worrisome is the attempt to control the branch of government on which the very existence of the rule of law relies: the judicial branch. When the government controls the courts, this leaves its opponents defenseless and illegitimately alters the political equilibrium of society. Similarly, control of the media poses a serious risk for democracy, which depends on an effective freedom of expression. Lack of political access by the majority of citizens due to the concentration of wealth and power in a few hands, the introduction of controls that eliminate free opposition, and threats and violence against social communicators are all threats to this essential feature of democracy.

Although political success has to do with results, these results cannot be the sole justification for changing the rules and seeking any means to prolong an administration in power. In a democracy, all power must have limits; otherwise, leaders would replace institutions, giving rise to new forms of caudillismo, which we already suffered for extensive periods in our past history.

In short, although democracy has achieved major gains in the region, based on many constructive elements, there are still elements that can destruct it, which coexist alongside these gains. Interaction between the two on the political front will determine whether our region exercises its full potential and takes advantage of the major opportunities offered by the global economy or remains, as so many times in the past, at the “threshold,” as prisoner of its own phantoms.