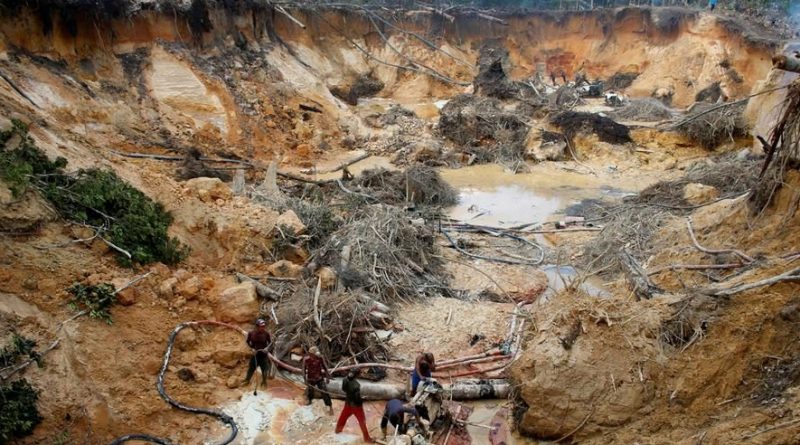 In 2016, Venezuela’s leader Nicolás Maduro designated an area larger than the size of Portugal as a “strategic development zone” to facilitate the mining of gold and other minerals. The area, called “The Orinoco Mining Arc,” includes some of the most pristine areas of the Amazon and borders Canaima National Park, a UNESCO World Heritage site.

Maduro’s decision violated the country’s Constitution1;2. It encouraged the rapid degradation of some of the most beautiful nature areas on Earth through deforestation, pollution, and destruction of entire species of plants and animals. A 2017 climate report predicted that Venezuela could lose 30 % of the Orinoco Delta – an area rich in biodiversity – by 20503.

As this nightmare unfolds, the world’s major environmental organizations have remained largely silent, leaving the fight against this wholesale ecocide to small, often underfunded Venezuelan organizations.

What is at stake

Venezuela is the 10thth most biodiverse country in the world4. It’s home to Angels Falls, the world’s tallest waterfall, and the Orinoco River, the world’s third-largest river by volume. Its flat-topped mountains, called tepuis, are amongst the world’s oldest geological formations on Earth, dating back some 2 billion years5. The Orinoco Mining Arc is home to more than 9,400 distinct plant species, of which 2,100 are endemic6. In the adjoining national park, a third of the plants are found nowhere else on Earth. Canaima National Park also is home to nearly half of the neotropical migratory birds that winter in South America7. Some 45 percent of its fish species are found nowhere else8.

But as I flew into Venezuela in January, I witnessed something else. Gazing out of the plane window toward Canaima, I saw vast swatches where the stunning landscape was suddenly scarred by mines. I learned how gold mining also was destroying water sources and endangering species and Indigenous communities, who are both doing the mining and paying its biggest price. They know the damage they are causing by working in the mines, but they often don’t have a choice.

“The government is talking about developing ‘sustainable (gold) mining,’” one Indigenous environmentalist told me, shaking her head: “But there is really no such thing as sustainable mining”.

While some tourism operators have benefitted by hosting rich individuals involved in the mining activities, others fear mining is destroying their livelihoods10.

“The mining is destroying the environment; it is taking it all away from us,” said one tourist operator.

In just five years, miners and others in Venezuela have stripped forest from an area equivalent to the entire landmass of Massachusetts11. Among the disappearing fauna and flora are the Harpy Eagle and the Orinoco crocodile;12;13. The newly barren land also contributes to more frequent droughts, flooding, and higher local temperatures14.

Mercury is another threat. It is illegal in Venezuela to possess, store and transport mercury. But it is widely used in the mines to extract gold from sediment. It has been estimated that 70% of the Caroni River, the second most important waterway in Venezuela, could be polluted with this chemical15. The contamination has spilled into tourist sites, too.

“You know, there’s mercury out there,” a tour guide whispered to me, pointing at the Laguna de Canaima, where tourists swim and enjoy the beautiful waterfalls, “it’s very little, but it’s there..“

The consequences could prove dire. Mercury can cause human birth defects that can be passed from generation to generation16. Neurological damage – blindness, loss of memory, speaking problems, hearing problems, and uncontrollable shaking – already have been seen among miners as a consequence of their mercury contact17;18.

Even after the UN Human Rights Council issued a report portraying the abuses in the Orinoco Mining Arc, the response remains fragmented and insufficient19. Internally in Venezuela, incentives are lacking to stop profiting from destructive mining activities. Internationally the will to take decisive action also seems absent.

Large international environmental organizations such as Greenpeace and the World Wildlife Fund have mostly left the fight to expose the South Venezuelan ecocide to underfunded local organizations like SOS Orinoco, Transparencia Venezuela, Provita and Kapé Kapé20.

“I want to create alternatives to gold mining,” one Indigenous community leader told me. “But you know, I don’t know any of those people from the UN and from abroad.”

A first step to finding alternatives for local communities is for the world to start watching and vocally supporting those working to stop the destruction. Accepting the silence and data blackout of the Maduro regime can only hasten the region’s devastation.

To put an end to environmental destruction from mining activities, we must think about new alternative green projects that can keep both nature and local communities alive.

This article relies on a number of anonymous conversations and interviews. Sources are kept anonymous due to their personal safety, given the repressive nature of the political system in Venezuela.

Mie Hoejris Dahl has worked in the public, private and social sector focusing on environment, agriculture, education, and public health. Her recent research focuses on the crisis in Venezuela, particularly investigating illegal gold mining. She is currently a Crown Prince Frederik Scholar and MPA candidate at the Harvard Kennedy School.
Twitter: @miehdahl