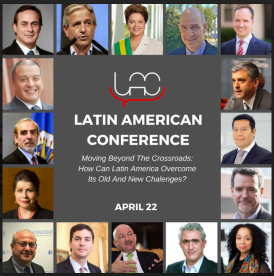 Latam Conference 2017: Moving Beyond the Crossroads
By Laura Hincapie

The fourth edition of the Latin American Conference last Saturday (April 22nd, 2017) gathered several recognized policy makers and politicians whose main speeches turned around the main economic and social challenges the region is currently facing, with a new world power represented by China, and also the rise of populism, which brings together a mass of angry constituents who are asking for new reforms and a new establishment. The following article will review the keynote speaker speech of former president of Brazil Dilma Rousseff, as well as the discussion on the economic and political panel.

President Dilma Rousseff centered her speech around the importance of democracy in the present situation of Latin America. Since part of the motivation for this conference was to discuss about the new governments in countries like Brazil, Argentina and Peru, President Rousseff highlighted the relevance of the change in Brazilian government in 2002, when Lula Da Silva, became President. In that time, Brazil had experienced decades of rapid growth before the debt crisis hit Latin America, but still had several challenges in terms of inequality, which was aggravated during the dictatorship in the late 1980’s. For this reason, Lula represented a leader who favored democratization and someone who had great concerns about redistribution. Thanks to the social policies implemented during his period, Brazil was able to reduce income inequality and to take out of poverty more than 35 million people.

The first panel was integrated by Luis Porto from the OAS, Fernando Bustamante from Ecuador, Milton von Hesse from Peru and Andres Ibarra from Argentina. Bustamante, Assemblyman at the National Assembly in Ecuador, stood out the role of President Correa as a dominant figure who gathers several parties within the country, which will change once the elected president Moreno comes into power with his new “democratic socialism” approach and the current polarization in the country. He also pointed out that Ecuador growth is due to the more availability of resources that initially came from the commodity boom and later from China, which has increased Ecuador’s indebtedness significantly but it is nor shown in official accounts. This also affects Ecuador’s autonomy indirectly since the country will eventually have to face high interest rates to pay its debt.

For the case of Argentina, with the new government, the current Ministry of Modernization underlined his previous experience under the same position at a local level with the city hall of Buenos Aires. Ibarra explained the main role of his minister at positioning the public service career as a tool to value human capital and to upgrade the operation of the state, which has been one the main bottlenecks Argentina has faced in the last decade. Also, Ibarra pointed out the role of the state as the engine of the economy in which the strengthening of the public service career will become independent of the government in power and will serve its citizens.

The second panel revolved around the new economic situation Latin America is facing, with lower prices of commodities, higher interest rates in developed countries which will entail a capital outflow, the role of human capital at boosting the economy, as well as trade partners’ diversification within the region and with China. All of the speakers agreed on the fact that relying on an open economy will not solve all the issues in Latin American, but they also highlighted the importance of enhancing the productive chains and of having China as one important commercial partner. In particular, Roberto Martinez, Head of Mexico Center for Latin America of the OECD, emphasized on the importance of human capital, especially since the demographic bonus is about to end and a huge share of the young population is in a situation of exclusion (informality or not productive). For the case of Paraguay, Santiago Peña, Minister of Finance, claimed that international trade will be the key for Latin America since it enabled Paraguay to diversify its commercial partners and also become the economy who grew the most in the last two years.

Finally, Miguel Angel Santos, from the Center for International Development, adopted a different approach in terms of human capital by pointing out the importance of migration of labor, from low productive environments to more productive environments, where they can increase their welfare. Immigrants are the crucial for the productive diversification. He also addressed China’s role in Venezuela, since it is also one of the main lenders for the government for the Development Projects Fund, which lacks of transparency and accountability given that the resources are not approved by the National Assembly and it requires a compensation in terms of oil.

Moving Beyond the Crossroads: How Can Latin America Overcome Its Old and New Challenges

The issues discussed during this conference, despite the fact they were framed in specific panels, always converged to five main areas in which Latin American countries will have to focus its policies in the following years: democracy, immigration, openness, diversification and China. To enhance democracy, Latin American countries will have to get closer to young constituents which use social media to express their concerns but not necessarily use formal ways of political participation. Immigration, openness and diversification have to be addressed also as a region, by reinforcing regional integration, while the relationship with China, which seems very advantageous for everyone, brings to light the historical high dependence of Latin American exports to United States and also the lack of political willingness to diversify commercial partners.

Lastly, it is a shame that the current situation of Venezuela was not address in any of the panels or by any of the speakers. Although it is difficult to find a key actor who had witnessed the prevailing situation in Venezuela, all countries as a region should have set a position about how to contribute to solve the crisis and if whether or not they should exert more international pressure in order and take active part.