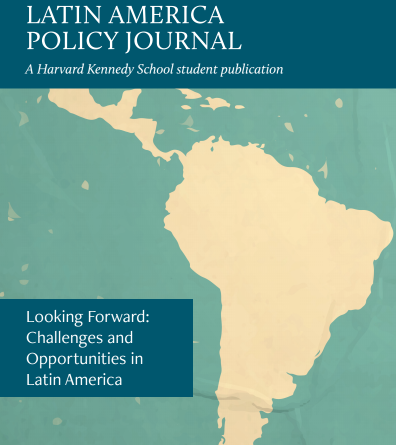 Latin America used to be characterized by economic downturn, vulnerability to commodity, insufficient public policies, weak institutions and a passion for soccer. While we continue to be challenged by those issues (and still believe we are the best at soccer), there is a shift in the narrative of the region in several regards: the new government and political shifts in Argentina, the peace agreement in Colombia, the improvement in local capacity and decentralization, and the fight against corruption. All of these changes are surrounded by uncertainty and skepticism, but they provide an opportunity for the government to learn from past mistakes and leverage best practices, innovation, and social awareness in order to strengthen the region’s resilience.

The Latin America Policy Journal (LAPJ) team is pleased to present our latest edition, Looking Forward: Challenges and Opportunities in Latin America. Authors from all across the continent collaborated in this edition and covered topics ranging from politics, economic, city planning and social policies. An online copy of the 6th edition can be here.

In the sixth edition of the Latin America Policy Journal (LAPJ), we touch on some of the challenges and opportunities that the region faces. For this edition, we are grateful to have an article from the president of Paraguay´s Central Bank, Carlos Fernandez Valdovinos, with an overview of Latin American economies that lay the groundwork for the following topics included in the latest edition.

Social Expenditure and Economic Vulnerability. A drop in prices has put an end to limitless social spending and constant solid growth in Latin America. Based on previous work from the Inter-American Bank, Martín Ardanaz and Priscilla Gutiérrez discuss the efficiency of social spending in Central America. Latin America’s need to redefine its economic model and to adjust to the post-commodity era is addressed by Pilar Navarro and Gabriel Villamizar. They take a look at the policies regarding international reserves and the implications in the Venezuelan economy. Moreover, Beatriz Botero explores the recent tensions between local communities and the national government surrounding mining exploitation in Colombia.

Gender Inequality. Latin America continues to be a region that is highly unequal for women and minorities. Women’s voices remain at the margins of public policy discussions. According to the Development Bank of Latin America (CAF),[i] the representation of women in the national legislative in 2012 was 23 percent (an increase of 8 percentage points from 2000), but several countries have very low participation. In countries such as Brazil, Panama, and Barbados, women represent less than 10 percent of the total number of legislators. Amanda Beaujon takes a look at female participation in the labor force in Brazil, and Natalia Cote-Muñoz reviews gender inclusion in Colombia’s peace agreement.

Inclusive Growth. In the last 10 years, 70 million people in the region were able to overcome poverty. However, millions are still trapped in the cycle of poverty.[ii] In her article, Pilar Navarro highlights poverty statistics and the progress of the region related to this issue. While poverty and inequality are key challenges, education can be the backbone of inclusive progress. For that matter, Andrew Blackman discusses in his article the education policy to close Ecuador’s learning gap.

Fighting Against Corruption. In 2016, major corruption cases emerged across Latin America. The Panama Papers, former president Dilma Rousseff’s impeachment, and Odebrecht corruption scandals have motivated the region to rethink anticorruption crusades. For example, five governments have signed conventions against corruption,[iv] and in 2015, Argentina’s president, Mauricio Macri, introduced a bill to fight bribery.[v]  In this edition, an article from Juan Gustale discusses corruption cases in Latina America and Paraguay in particular.

The LAPJ team would like to express our sincere gratitude to the John F Kennedy School of Government at Harvard University Dean Douglas Elmendorf; the Harvard Kennedy School Student Government; the Mossavar-Rahmani Center for Business and Government; the David Rockefeller Center for Latin American Studies; the Shorenstein Center on Media, Politics, and Public Policy; and the Malcolm Weiner Center for Social Policy for their generous financial support to make this edition possible.

I would also like to thank Johanna Lopez, Juan Gustale, Manuel Gonzalez-Schuler, Richard Medina, Astrid Pineda, Carlos Castillo, Daniela Serrano, Felipe Sarmiento, Jimena Romero, Laura Hincapie and Michelle Infanzon; without your hard work this edition could not have been possible.

Finally, stay in tune for the next edition. Next Fall the LAPJ will be releasing the Call for Submissions for the 7th edition.

[iii] “Competitive Cities for Jobs and Growth: What, Who, and How,” World Bank, 2015, www.worldbank.org.