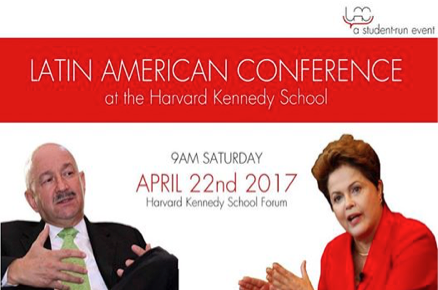 The 4th Edition of the Latin American Conference, a student-led event, is due to take place at the Harvard Kennedy School on Saturday, April 22nd 2017, under the title: “Moving Beyond The Crossroads: How Can Latin America Overcome Its Old And New Challenges?”

The Conference seeks to become a constructive space to fostering awareness and generating an open debate among students, scholars, policy makers and other stakeholders about issues related to the Latin American region.

The Conference will present an agenda around three main topics that are crucial for the region’s future:

Each topic will feature a panel of distinguished speakers both from government and the private sector, followed by a conversation with the audience.

Assemblyman at the National Assembly, Ecuador

Panel III: The Trump Administration and its priorities in Latin America

President of the Inter-American Dialogue

Attendees will have the option of sending their CV/Resume to speakers!

You can check out more details on our website: www.latamconference.org