Home > Published Edition > Volume 12, Summer 2022 > The Fight for Freedom in Venezuela: Reflections on Leadership and Strategy 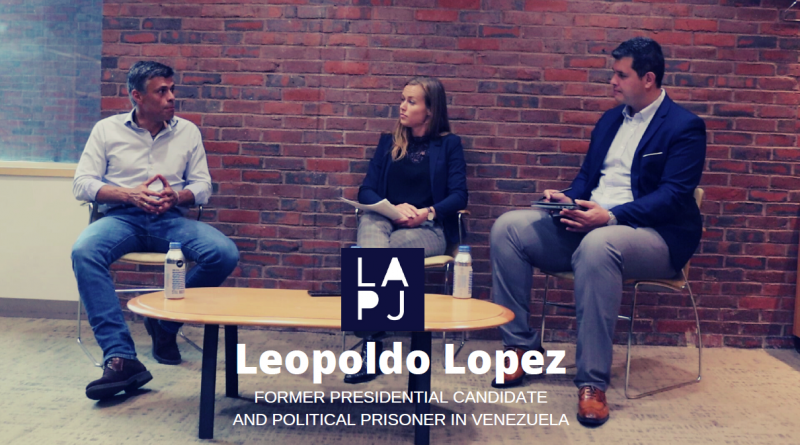 First, we would like to hear what initially got you into politics? What motivated you and has it changed over time?

I’ve always been interested in politics. Not in the exercise of politics as such, but in the public; being useful to address deep inequality issues of my country. Unfortunately, they’ve gotten much worse over the past years. The reason I got into politics many years ago and why I came to this school remains the same; hoping we can promote a better future for the people of Venezuela.

An important change you’ve experienced is living in exile. What do you think about leading from abroad and the limitations that come with it?

Over the past eight and a half years, I’ve been out of the streets of Venezuela, but that doesn’t mean I haven’t been in contact with the people.

However, your question goes to how you do politics from exile. That’s a historical question for us in Latin America. Leadership from exile is limited, and it needs to be complementary to those in the territory. We need to learn from mistakes that have been made in countries where there’s been a confrontation between those who are inside and those who are outside. There are arguments for both sides; those on the inside saying: “Those who left don’t know anything,” and those on the outside saying: “Those on the inside have the Stockholm Syndrome or are not willing to fight the fight”.

We need to overcome that and articulate a complementary leadership for all those who want to contribute to making our country free. I’m working in that direction, understanding that it’s not easy. But you need to deal with the circumstances that you’re faced with. Many of us need to contribute from exile and be humble to understand that the contribution needs to primarily support those who are in Venezuela.

What are your thoughts on how to support the diaspora, and what is its role in the future of Venezuela?

Venezuela has a population of 30 million people. Over the past eight years, more than 7 million have been forced to leave. Most would rather be in Venezuela but were forced to leave looking for opportunities, food, shelter, medicine, and/or security. Many who were engaged in the political fight for freedom were persecuted.

Venezuela had always received migrants from other parts of the world. What Venezuela is today was, in great part, built by migrants. But the tide changed, and Venezuelans have left. Maybe a third of those outside Venezuela will return, leaving millions of Venezuelans abroad. That presents a huge challenge; how to incorporate the talent, connections, knowledge, and capital of millions of Venezuelans outside to contribute to reconstructing our country.

I believe that in the future, Venezuelans who were living abroad should have political representation in the parliament and at the level of the economy. There are many ways the diaspora would be able to contribute. But today, unfortunately, many of those who fled are suffering, many are prey to hardships, and that’s a very saddening reality.

What are some lessons you’ve learned from the strategy pursued by the interim government in the past, and is there anything you would have done differently?

There are many lessons learned. First, we all underestimated the type of support the Maduro dictatorship had. In 2019, when Juan Guaidó was recognized as president, I remember headlines saying Maduro had become isolated from the world. That’s not true. The world today is not the world of liberal democracies, and we’ve learned that the hard way. Because Maduro was able to gather support from mighty countries; China, Russia, Iran, Turkey, and Cuba. That impacted how sanctions were imposed and the capacity the Maduro regime developed to go around them, thanks to the support of this autocratic network which works, thinks, and supports each other as a network. While on our side, we don’t have that network of an alliance for freedom.

Another lesson is the internal governance of the interim government. The interim government was built upon the National Assembly which acted as the legislative and executive power simultaneously, and the decision-making process got messed up in internal politics. It’s very important to consider governance issues and the capacity to decide, implement, and evaluate change.

Sanctions are one of the measures the opposition has advocated to put pressure on Maduro. What was the rationale behind sanctions, and did they have the intended effect?

I’d start by saying that sanctions are not the root of the problem of the humanitarian crisis and economic collapse of Venezuela. That has been studied here at this university with great levels of detail. The crisis in Venezuela started way before the imposition of sanctions.

Second, there are some lessons learned about the implementation of sanctions. They can be more strategic, particularly around the people responsible for corruption and human rights violations, those at the core of Maduro’s power structure. That could have been more effectively designed.

However, I believe sanctions are a tool to be used, as we are seeing now, with sanctions being the primary tool employed by the US and Europe against Russia after the invasion of Ukraine. Seeing Europe’s fast-track sanctions on Russia, I think, leads to a new analysis around sanctions; they need to be more specific and widely spread. I’ll give an example. Maduro was able to go around sanctions because of an international kleptocratic network. We’re talking about Turkey, Iran, and Russia. Sanctioning only one part of that network is insufficient, and I believe Europe and the US need to take a strategic look and impose very precise sanctions on the enablers of this network.

The discussion of whether sanctions are good or bad does not help solve the crisis in Venezuela. Instead, the debate should be on how sanctions can become more effective, better targeted, and widely shared by the US and other countries.

Recently, we’ve seen an approach from the US government to the Maduro administration. This raises questions on how to deal with the fact that the implementation and success of sanctions rely on third parties and their agendas?

That’s true for sanctions and any kind of support. When you ask for a third party to support your cause, they’ll always put their own interests first. However, there’s an issue of principles not only about our policy on sanctions but also about efforts to democratize Venezuela and other countries.

Back in the 1990s, when I was here at the Kennedy School, the Berlin wall had just fallen and the entire conversation was about “the end of history,” about the drive to promote democracy, freedom, and a market economy. The logic was that to have a market economy, you need to have a democracy which is also a precondition for the well-being of people.

25 years after, things turned out very differently. It turned out that capitalism was perfectly fine without democracy. And what was on the rise was not democracy but autocracy. What worries me most is that such idealism to promote democracy is no longer present. There seems to be disenchantment with democracy as an ideal, and not many are willing to step up and defend democracy. But Russia’s invasion of Ukraine might start changing that, strengthening the commitment to freedom and democracy that is greatly needed.

What are lessons from previous negotiation rounds, and how do you think we should address potential future negotiations?

Negotiations in Venezuela have been very frustrating. They’ve mostly been used by the regime to their benefit; to gain time or ease the pressure. I believe the main lesson is that negotiation needs to be a negotiation and not a dialogue.

The third lesson is the team of negotiators. In past negotiations, there has been the dictatorship on one side and a collection of wide interests on the other. That continues to be a challenge.

Your political career has come at great personal cost. What has helped you during the difficulties you’ve been through to keep mobilizing, organizing and staying motivated?

Well, there’s a part to that question that is idealism. It really is. I believe that to fight this struggle against the dictatorship, one needs to be convinced that it’s the right thing to do. You need to understand that there are good times and bad times. Sometimes the public likes you, sometimes they don’t. The same happens in sport; the public sometimes gets frustrated, but your commitment is to win the game, and winning the game, in my view, is seeing my country free.

I’ve never regretted my decision to present myself voluntarily. I had the possibility of leaving the country and going to an embassy instead of military prison, but I went, knowing exactly what I was doing. Fortunately, my family understood and came with me in this fight. An important lesson is that life is not a staircase where you’re going from one level to another, always in an ascending line. It just doesn’t work that way. Sometimes you’re up, sometimes you’re down, but you need true commitment and motivation. For me, that commitment is an ideal; that our country could be in a much better place, and that to get there, we all need to contribute.

Looking ahead, how do you picture Venezuela, and do you think we may need a process of reconciliation as a nation?

For sure, I think that needs to happen. It would be a mistake to pretend to start a new epoch, only seeking justice or vengeance for what happened in the past. Yet, reconciliation is complex as many, many crimes have been committed.

Reconciliation should not be around impunity; it should be around a common view of what should happen within the country’s public sphere. What would be the legal framework? What will be the rules of the game for politics? What will happen to those who win an election, but also to those who lose? What guarantees would be given? These issues need to be part of a negotiating effort that I hope takes place and leads to presidential and parliamentary elections.

Transitions are never perfect – I don’t think that, in the case of Venezuela, it will be perfect – but I think it’s a necessary process to reach what we hope for; a strong democracy and a strong economy that will give benefits to the larger part of our population. It’ll be complex. We need to learn the lessons from what has happened elsewhere, and we need to learn our own lessons. We need to take resentment out of our hearts, which is an exercise I always do. I, fortunately, don’t have resentment as a motivation for my everyday commitments. I’ve been able to overcome that very negative sentiment that’s very present in the political dynamic in Venezuela and our region as a whole.

Mie Hoejris Dahl has worked in the public, private and social sector focusing on environment, agriculture, education, and public health. Her recent research focuses on the crisis in Venezuela, particularly investigating illegal gold mining. She is currently a Crown Prince Frederik Scholar and MPA candidate at the Harvard Kennedy School.
Twitter: @miehdahl

Johan Cañas is a Master in Public Administration in International Development (MPA/ID) 2023 candidate at the Harvard Kennedy School of Government. Before coming to HKS, Johan was a Macroeconomics Studies Officer at the Development Bank of Latin America (CAF) focused on Fiscal and External Sustainability and Productivity. He holds a BA in Economics from Universidad Central de Venezuela in Caracas
Twitter:@johan_canas